The Birth of Artificial Intelligence

Artificial intelligence is everywhere from movie screens to the toybox to mainstream business, however, there’s nothing new about it. Aware or not, humanity lives with AI day in and day out.

Fifty years ago in 1968, film producer Stanley Kubrick introduced global audiences to Hal, a cheeky computer with emotional responses, programmed to think for itself and defy its human pilot and co-pilot. Hal can even read lips. The epic science fiction movie, 2001: A Space Odyssey, is widely regarded as one of the greatest and most influential films ever made.

Fast forward 11 years to 1977 to “a long time ago in a galaxy far, far away”. George Lucas gave us Star Wars complete with a protocol droid and a navigation droid. These free-thinking droids, C3PO and R2D2, travel the Universe with Luke Skywalker and company, showcasing AI in all 10 movies. Star Wars holds Guinness World Records title for the most successful film merchandising. The estimated value of the franchise is almost $US 42 billion.

Honorable mention goes to Star Trek’s Commander Data, a fully functional droid serving as the second-offer and chief operations officer aboard the Federation starships USS Enterprise D and E. Data’s positronic brain includes an emotion chip, making him as close to human as a fictional droid can be. The series ran from 1987 through 1994.

DATA, Star Trek: The Next Generation, The Naked Now

Over 20 years ago, AI found its way into toy boxes and playrooms around the world. In 1998, the first domestic robot designed for children flew into the hands of over 40 million children. Complete with a sassy personality, Furby spoke its own language but was programmed to replace Furbish with English words and phrases over time. Its speaking abilities were translated into 24 languages. In 2005, the manufacturer launched Emoto-tronic Furby with voice recognition and more complex facial movement, and in 2012 the company updated Furby with LCD eyes and a mobile app.

Furby’s not the only game in town. Toy makers have been packing circuit boards and wireless chips into everything from the working woman edition of Barbie to race cars for years. Cosmo, one of the most sophisticated playmates to date, catapulted into the market in 2016. Cosmo mimics human behaviour so well, it’s scary. Created by the robotics company Anki, the robot is designed to interact with people and things and changes his behaviour over time as the software learns. Cameras and sensors help Cosmo recognize people, pets and learn new words. Check out Cosmo’s version of playing a winning game.

Let’s not forget Apple’s virtual assistant, Siri, Alexa or Cortana, Google’s new virtual assistant. AI wasn’t born yesterday. We are simply more aware of its potential as it matures and joins the mainstream of companies worldwide. Marketing is only one of the disciplines where AI is embedded in many successful global companies.

Take Netflix. Predictive analytics skyrocketed Netflix light years ahead of its competition. Netflix uses data and analytics to inform content production and acquisition, in comparison to others using analytics only for content promotion. No more pilot episodes. Analytics make it easy to determine whether a show will be a success or not. The success rates for Netflix originals are 80% compared to 30 to 40% for traditional TV shows.

Google uses RankBrain, a machine-learning AI system that processes search results. Machine learning and AI belong to the same family of intelligence, the difference being that with machine-learning a computer teaches itself how to do something. However, RankBrain is only part of Google’s search algorithm, called Hummingbird.

Deep learning, machine learning on large datasets, is another facet of AI. Facebook’s new AI-powered system, analyzes thousands of posts in over 20 different languages in under one second, less than the blink of an eye. Not only does the Deep Text software analyze posts, it analyzes the content allowing the company to build new tools and features that interact with a person. That’s not all. FBLearner Flow powers data-intensive products like the news feed and language or translation services.

Think about AI for product pricing, a critical element of marketing. AI takes the guesswork out of price optimization and maximizing profitability by collecting and analyzing data on a market-by-market basis to set the optimal price.

Relevant, responsive customer service increasing relies on AI. USAA uses AI technology to analyze thousands of factors that allow the matching of broad patterns of customer behaviour to individuals. The technology helped USAA improve its guess rate from 50 to 80 percent.

Many companies, including Air France KLM, use Facebook Messenger to communicate with their customers. The company allows passengers to check in, make itinerary changes, get flight status updates and communicate with customer service through the app.

The 2017 Artificial Intelligence Global Executive Study conducted by MIT Sloan Management Review and the Boston Consulting Group found that for most companies the appetite for AI is bigger than the budget. The report says:

“The gap between ambition and execution is large at most companies. Three-quarters of executives believe AI will enable their companies to move into new businesses. Almost 85% believe AI will allow their companies to obtain or sustain a competitive advantage. But only about one in five companies has incorporated AI in some offerings or processes. Only one in 20 companies have extensively incorporated AI in offerings or processes. Less than 39% of all companies have an AI strategy in place. The largest companies — those with at least 100,000 employees — are the most likely to have an AI strategy, but only half have one.”

As companies move steadily toward digital transformation, the world as we know it will change forever. Beyond the digital revolution, the next wave of transformation is marked by velocity, scope, and impact. The implications are far-reaching. What’s the role of communication professionals ushering in the fourth industrial revolution?

Claire Watson consults to global, provincial and national companies on their communication needs. Her expertise encompasses research and measurement, internal and change communication, branding, marketing, public and community relations, advocacy and corporate social responsibility. She has taught extension classes for the University of Regina and developed unique training courses for the Centre for Strategic Communication Excellence. She holds 33 international and 150+ national and provincial Awards of Excellence. In addition, she has received a Lifetime Achievement Award from IABC Regina, Master Communicator designation from IABC Canada and the IABC Chairman’s Award for leadership in the profession. 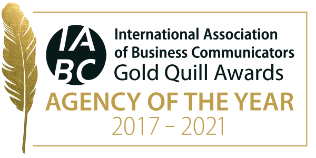